By continuing to use our website you agree that cookies are used to improve the user experience (e.g. to saving settings). More info. That's Fine
Please support us by disabling the ad blocker for our website. Thank you! I will

FXStabilizer PRO is a martingale grid system that trades on 8 different pairs. It usually enters in counter-trend direction and if the position does not hit the profit target, it enters a second position with the same lot size. If the price moves further against the position, it will double the lot size on each subsequent position.

In our backtests the EA opened up to 8 positions, which means that the last position will be 64 times the initial lot size (26 because the first two positions have the same size). The position size of all 8 positions would be 128 times the initial size. So the maximum risk is very high with this strategy and a high leverage is needed to run it.

The straight line of the equity curve in backtests of martingale systems often looks great. But as you can see from our portfolio backtest, the most recent period, which probably lies outside the optimization period, shows a much worse performance. This is often a sign of over-optimization.

Additionally, we tried to run backtests with a 28-years shift in the data, but the EA did not enter any trades. Not allowing earlier years looks suspicious, since it prevents to test for time filters, but maybe there are other reasons, which explain this behaviour.

There are a few live signals available for this trading system. Some of the signals, like the EURUSD signal, look very successful, but there were also signals that have been stopped or show a large drawdown of 80-90%.

Some of the live signals look impressive. But like every martingale system the maximum loss with this EA can be very high. At least it cuts the losses at some point, so there is less risk to blow the complete account in one big movement. A longer out-of-sample period would be needed to really judge whether it is over-optimized or whether it just had a bad period. So we are planning to re-test the same version in the future. For those who are aware of the risk, but have fun in gambling with one account, we advice to only use the more consistent pairs, like EURUSD.

Why do we use fixed lot size (0.1 lots)? Check our educational page. 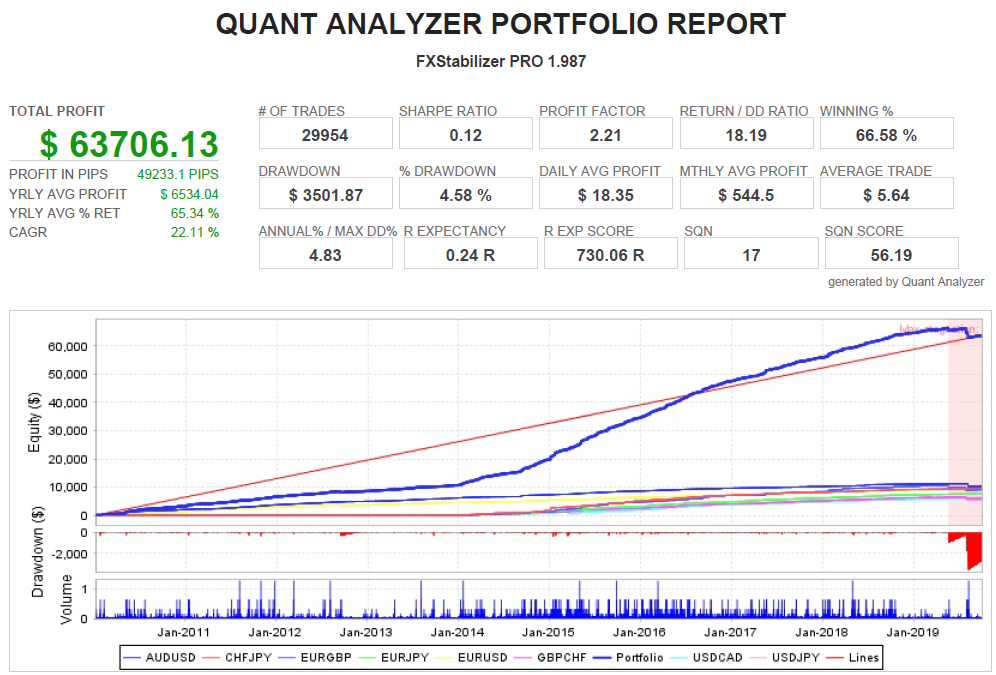 An EA that is developed by Generic Machine Learning. Check it out

A momentum / trend following strategy with good and stable backtests.

A very promissing EA that trades intraday pullbacks on a impressive number of 28 pairs.

A cheap night scalper with promising backtests. Check it out.

A S/R scalper for the EURUSD pair with an impressive backtest.

An asian scalper with a 4 years old live account. Check out our review

A martingale system which survived astonishing long in live trading

A trend / counter trend system that trades 31 different pairs. Check it out

A successful trend following EA with nearly two years of live history. Check out our review.

A quite cheap intraday scalper for the NZDUSD. Is it worth the money? Check it out.

A counter-trend system with inconsistent backtests

Want to start trading on a live or demo account?

Be aware that most retail traders (usually around 60-80%) lose money. Please consider whether you can afford to take the risk of losing your money.